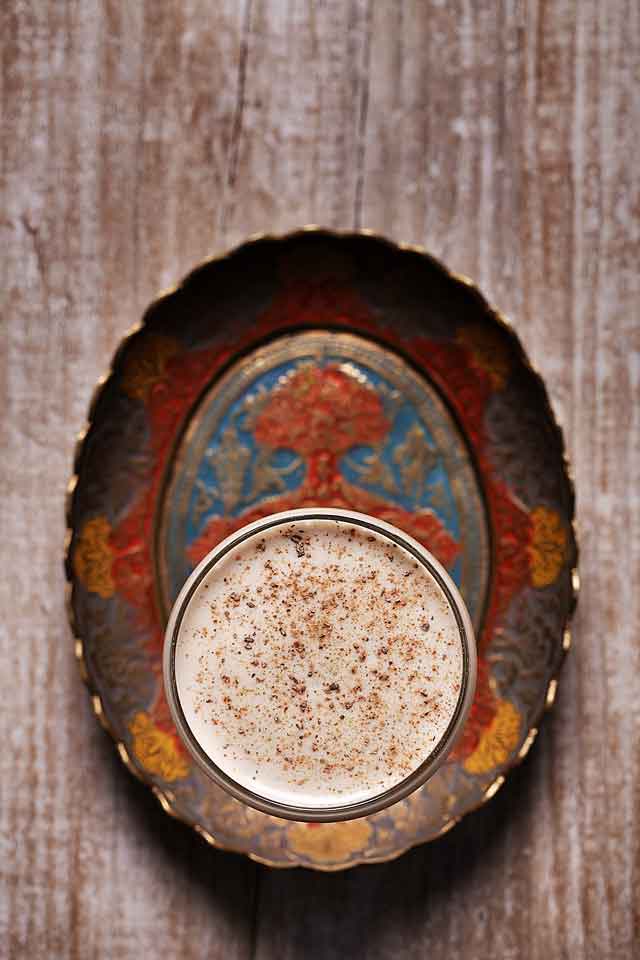 As a matter of fact my blog is a place where I constantly confess my love for different mixed drinks. I have not been writing about a disappointing tasting recently – the life is too short for describing things you don’t like. Today the time is ripe for describing my huge love for yet another type of wine flips – Madeira Flip. I’ve gotten acquainted with wine flips not so long ago — I was fascinated by Porto Flip last January, after that I started to discover another type of flips, and thus, to explore different type of fortified wines, which usually are a base spirit of these drinks. Such exploring has secondary effect that I start to extensively use these different types of fortified wines in various cocktails. This broadens my imbibing horizons pretty well – there are only benefits!

Wide usage of fortified wines in flips is due to their powerful character. Actually, flip is not an easy workout for wine inasmuch as egg yolk has its own taste and smell and wine must have a certain potential to pass through this Kogel-mogel.

One of the best choices in case of flips is Madeira wine. Very aromatic, flavorful, distinctive wine from Portuguese archipelago – Madeira Islands. The main thing that makes Madeira Madeira is a maderization process – longterm moderate heating of wine that forms its unique palate. This effect was discovered accidentally while fortified wines from Madeira were traveling to India and, if they weren’t sold, back. After such long trip around Africa through two oceans wines got constitutive improvements. This way famous Madeira wine was born. Obviously, nobody ships wines around half of the world for producing Madeira now. Maderization is fully performed during the so called estufagem aging process. According to the EU regulations, Madeira wine is regional fortified wine produced only in Madeira Islands from specific grapes varieties such as Sercial, Verdelho, Bual or Malvasia. However, most of reasonably priced Madeiras are produced from Tinta Negra variety. Madeira wines also are classified by sugar content – from Seco (Dry) to Doce (Sweet) and by age (being aged wines).

One of my favorite books in which wine flips are mentioned is New and Improved Bartender’s Manual and a Guide for Hotels and Restaurants by Harry Jonson. You know why? Every described recipe author accompanies with lovely ‘This is a very delicious drink, and gives strength to delicate people’. Certainly! I am such a delicate man which periodically gets strength from wine flips ;) And yeah! They are extremely delicious.

Being a huge fan of flips I have discovered my own flip construction, which was successfully probed on Porto Flip (unfortunately I haven’t yet written the post in English, but if you click the link you can see a couple of photos and read the recipe). In case of Madeira Flip I never add liqueurs, in my humble opinion this wine doesn’t need such improvements. 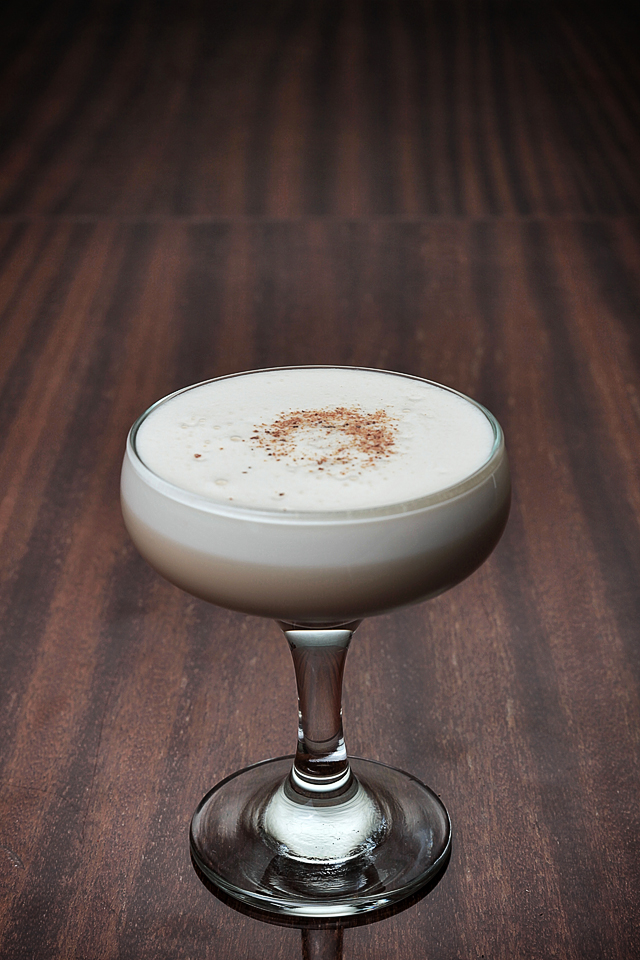 50 ml madeira
1 tsp. sugar syrup (1:2)
4 whole quail eggs
Put all the ingredients into a shaker and shake vigorously without ice. Then add a few large ice-cubes and chill the cocktail. Strain into a coupe-glass. Dust with freshly grated nutmeg.

Traditionally, a couple of words about the ingredients. Let’s begin with a sugar syrup questions. Actually many sources prescribe using plain sugar in flips but I think it is not ideal because it’s so difficult to control completeness of granulated sugar dissolving. The most usable form of sugar in the bar is, certainly, syrup. But we should always remember that syrup contains water so it can dilute our cocktails. However, if we don’t need such dilution (actually, it may be important for achieving proper texture and mouthfeel for some drinks), the right way is using strong sugar syrup, for example, 1:2 or even stronger. For my flips I always use a 1:2 syrup which I make from 1 part unrefined Demerara sugar (Billington’s), 1 part quality refined granulated sugar and 1 part water. Also I am always simmer my syrup for some time for the best taste and good preservation (simmering is important if you make a syrup from unrefined sugar).

In reference to the amount of sugar syrup, it totally depends on your tastes and sweetness of Madeira wine that is used. Personally, I prefer rather sweet flips, as you have noticed by now ;)

The next important question is eggs. Yes, I know, that a routine cocktail ingredient is chicken eggs. But I specify quail ones. I think it is the best choice for such a delicate cocktail as flip. Actually, quail eggs have plenty of advantages in comparison with chicken eggs. First off all, raw quail eggs are undoubtedly tastier than chicken’s, next, they are healthier and of course they are cuter! 8) [It seems to be significant for overcoming ovophobia 8)] Delicacy eggs for delicacy cocktails, that’s right! But I should warn, contrary to popular belief that quail eggs are safer [concerning salmonella] than chicken eggs – it isn’t true. Both type of eggs are safe enough if consumed fresh and with certain caution but, in any case, risks can’t be reduced to zero.

As to Madeira, I should admit that I have such a narrow experience here. As a matter of fact, I usually use inexpensive wines, 3-5 years old. And yes, being a sweet tooth imbiber, I prefer sweet full rich Madeira in my flips.

And, finally, if you properly combine these three things, i.e. if you shake the mix as hard as you can and a little harder (I strictly recommend using dry shake with a little cheat in the form of a hawthorn strainer spring in the shaker for the best result), you will obtain an absolutely awesome, no, not drink, but nectar. It tastes so good! Or, wait, no – It DOES taste damn good! :) (It is really difficult to express my admiration for flips using a non-mother tongue). Sure enough, Madeira Flip is an exquisite dessert drink. Madeira brings a ton of sweet dessert tastes to the drink. Cacao and chocolate, nuts, fresh pastry, dried and candied fruits wallow in a thick silky foam. Absolutely wonderful! 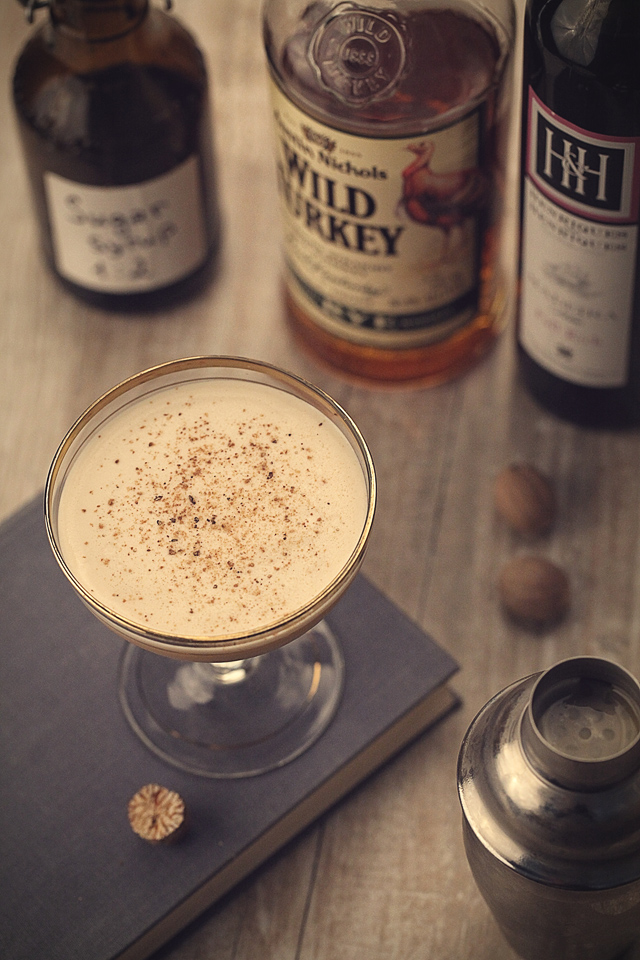 Definitely, everything is totally perfect in wine flips, probably except for their strength 8) An ounce and a half of fortified wine is almost nothing in our hectic life, isn’t it? 8) But, fortunately, mankind has successfully solved this problem already, for example with Boston Flip – Madera flip fortified with American whiskey. This cocktail was founded on the stunning Spirited Alchemy Blog this summer and, actually, that was an inspiration :) In spite of the fact that I had bookmarked the same recipe in Cocktails and Mixed Drinks by Anthony Hogg way back last winter 8)

It so happened that I was not in the proper mood, so I didn’t investigate the history of the Boston Flip. However I can’t help mentioning the sophisticated name of the drink. Obviously, it’s impossible to imagine the best name for an old drink with English origin, which consists of imported Madeira (which usually ships by sea) and real American spirit heritage – Rye, isn’t it?

As a rule, a common recipe of Boston Flip prescribes an ounce and a half (or even two ounces) of each wine and whiskey, but I decided not to break my favorite flip construction so I slightly decreased the amount of liquors. 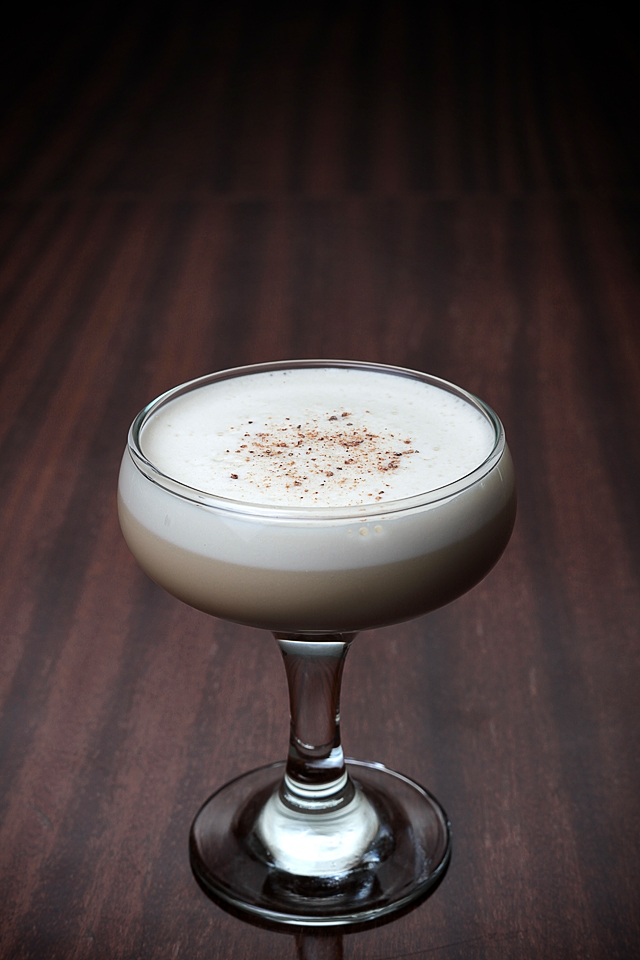 30 ml rye whiskey (or bourbon)
30 ml madeira
1 tsp. sugar syrup (1:2)
4 whole quail eggs
Put all the ingredients into a shaker and shake vigorously without ice. Then add a few large ice-cubes and chill the cocktail. Strain into a coupe-glass. Dust with freshly grated nutmeg.

Whatever considerations about the flip ingredients mentioned above are completely appropriate for this drink. The whiskey question gives us some space for experiments. The point is that some old books strongly recommend rye whiskey while some modern resources concede bourbon. I was happy to taste the flip with both type of American whiskey.

As I wrote above, Madeira Flip is my the most exquisite dessert. And usually it takes me about a few second to guzzle it 8) while mixing takes me at least several minutes. It seems to be so disproportionate, but it’s completely righted with whiskey :) Boston Flip allows me to sip the drink more slowly so my pleasure time aspires being equal to working time. Not bad! 8)

Rye plays very well in that flip. If we talk about some pungent and powerful stuff like my favorite Wild Turkey Rye 101 (actually, here, in Ukraine, rye is a very hard-to-find liquor, so, to my great embarrassment, I’ve only got two bottles of rye in my bar cabinet – the above-mentioned Wild Turkey and a Jim Beam Rye), it brings a lot of spicy, peppery, burning notes to the drink. And that works well! Just as it is impossible to spoil dark chocolate with chili pepper, so it is impossible to spoil Madeira Flip with rye 8)

Another, a bit milder, whiskey (especially most of my bourbons) give a not so distinguished flip. All my Boston Flips were excellent drinks but some whiskey were able to play only supporting role, which nevertheless they played very well :) In any case, Boston Flip is an awesome drink that works as well as a dessert and a seductive and hefty nightcap alike.